Skip to content
By Pete Heins-N6ZE
In my retired life, I live in Thousand Oaks, but spend time on Whidbey Island, about 20 miles North of Seattle. I manage to do some HF/VHF/UHF operating from both QTHs, despite major “domestic engineering” needs at both locations!

Because July is normally at the peak of the Summer Sporadic E Season (Es), I concentrated my limited WA radio time this week to be on 6meters only. Es tends to heavily favor 10 meter and 6 meters. Single hop distance ranges from

about 300 miles to a maximum of about 1200 miles. Multi-hop Es also occurs with DX as far as the East Coast, Hawaii, and even Japan on a very SPORADIC basis!

With the advent of the digital mode of FT-8 about a year ago, a tremendous number of 6 meter QSOs now utilize that mode. Typically only about 25 or 30 watts of power is utilized. From my home Thousand Oaks (DM04ne) location. I typically can work stations out to about 150 miles on closed band Tropo conditions.

During a Single-hop Sporadic E Opening, I typically work stations in AZ, TX, CO, OR, WA, and British Columbia. I run about 30 watts into a 5 element yagi, at 12 feet above ground level. From my vacation location on Whidbey Island, WA, I can work stations out to about 150 miles in Portland, OR; Victoria, BC and Vancouver, BC. From Clinton, WA (CN87tw).  I use an FT991 throttled back to 30 watts with a 55 year old three element Hi-par Hilltopper yagi sitting on a tripod on my back porch which overlooks the Puget Sound, which is some 600 ft lower in elevation. 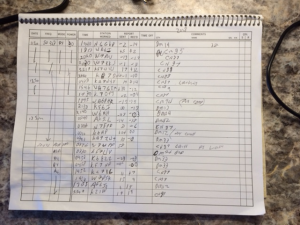 With decent Sporadic E conditions during the week of July 11th, I was able to make a number of Tropo QSOs, both in the Greater Seattle, WA and  Vancouver, BC area, as well as Es QSOs to CA, including one with VCARC’s Rob, W6RH! This was a rare time for me to be able to work 6 meter DX from WA to CA, but a very quick inspection of my logbook page would leave some people to think I had made all of the contacts from Thousand Oaks instead of from Whidbey Island!

Good Es conditions will continue SPORADICALLY through the end of July or so. If you have any 6m SSB gear, a laptop, and a simple antenna, try to get on the air to enjoy the fun.

Two sites provide current propagation information:  DXMAPS and My DX Summit. Other questions?? E-mail me at N6ZE@arrl.net or Adrian, K6KY.