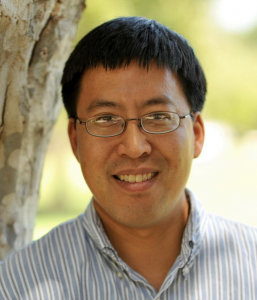 It was the mystery antenna.  It was green, encased in a green fiberglass protective case – but otherwise, impossible to fathom. Was it a 2m antenna? 220? 440? 2.4G?  Or something else?  I’d come upon a random  antenna—pulled off the rooftop of a building for the wife of an SK—with no markings, not connected to any radios, no clues to its usage, and only its mysterious green case and N-type connector on it.

Now, I usually will try to figure out a mystery antenna by running my own homebrew antenna analyzer or MFJ259 against it, to see what it is. That works, most of the time, for the run-of-the-mill, HF or VHF antenna. But this one was a bigger mystery—obviously, with an N-type connector, this was built for UHF or higher bands. The other way—run a radio to the antenna with an SWR meter—sometimes works, but I wasn’t about to blow up a transceiver if it just didn’t resonate anywhere near the bands.  Plus, if this really was something like a 2.4G or 5G Wi-Fi antenna, that wouldn’t work.  So I was stuck, for a while.  It sat in my garage all summer.

Then, intrigued by the mystery, on a whim, I brought the mystery antenna to a weekend coffee with Stu, AG6AG, and Norm, AB6ET… The guys are always hauling around their newest toy or interesting contraption to coffee, and this one was a new one.  Stu, ever the resourceful ham, offered to pull out his vector network analyzer (VNA) – an interesting tool which lets you characterize the frequency response of antenna, filters, and other RF components. It both generates signals, and analyzes those signals.

So, intrigued, we hoofed it over to Stu’s office after coffee, where he pulled out the VNA.  Encased in a nice box with various leads and connectors, the blue box just plugged directly into his computer.  Double clicking on the right software (Java, he said), we plugged in the mysterious green antenna to see what we could find out.

With a click, there it was – a spectrum readout!  But what a mystery. We looked at the known ham bands… SWR was way high for 2m… and it had an SWR over 5:1 on 2.4G.  It wasn’t a 440 or 220 antenna, that was for sure.  But it sure did have a peak at around 1.0Ghz or 1.1Ghz.  Well, anyone who know the ham bands, knows there isn’t any ham band anywhere near 1.0Ghz.  We thought – hey, maybe we’ve changed the SWR by     holding this antenna—perhaps it was cut for around 900Mhz?  Were we doing something wrong?  We ran the antenna again, this time, perched away from metal objects and not using one of us as an antenna mount.  (AB6ET made a great antenna mounting structure, but perhaps he was throwing off the SWR).  Nope, same reading. AG6AG zoomed in on the spot around 1.0Ghz…  It was a perfect 1:1 down there… if you zoomed it, it was somewhere around 1090Mhz…  WAIT A SECOND!

Now, I have lots of projects going on at any one time, but one of them sitting on my desk was figuring out how to get an RTLSDR (a cheap, USB dongle which can be used for SDR) working.  I’d been mucking the night before on a software program called dump1090…  AHA!  1090 Mhz, it turns out, is the frequency used by commercial aircraft for ADS-B.  ADS-B is a protocol which sends the position and other information as a beacon, so that aircraft can be tracked across the world.

A quick search on the Internet for ADS-B antennas: voila!  There it was, that green antenna! It was an ADS-B antenna, specifically designed for receiving those aircraft signals!

The mystery was solved!  The green antenna, in fact, is one designed by a website called Flightaware.com – where you can see every aircraft in the air, anywhere, and see where it’s been and where it’s going.  Think of it as an APRS.FI for the aircraft world.  It’s heavily used by pilots and the aviation industry.  Flightaware had   created the antenna to encourage anyone with an interest (mostly, it appears, pilots and ham radio enthusiasts) to help create a crowd-sourced data network.  Hooked up to an RTLSDR and a Raspberry Pi, that green antenna was key to building its network to see every piece of airspace possible.  Flightaware—to this day—apparently provides free, premium access to its services to those hobbyists willing to put up an antenna and feed data to its network.

Lesson of the day?  Mystery antenna?  No idea what you’ve got?  Get yourself a VNA (or buddy up to that ham you know who has one!)