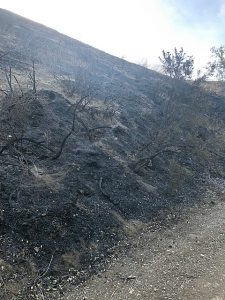 Amateur Radio repeaters and TV (ATV) have helped to keep the broader community informed on the local status of widespread fires in Southern California, radio amateurs say. CVARC member Benjamin Kuo, KI6YR, who had to evacuate but now is back home, said remote Amateur Radio Emergency Data Network (AREDN) mesh cameras captured video from fires across Southern California earlier this month, including the early stages of the Woolsey Fire.

ATV cameras also offered views of some of the state’s less prominent fires, including the Briggs Fire in Santa Paula, and the Peak Fire in Simi Valley.

“Another big success: When most of Southern California lost their internet and phone, local repeaters were used to relay information about the fire status to ham radio operators,” Kuo told ARRL. “We also used our AREDN mesh to enable some of our members to be able to access key public safety information on their computers via our high-speed network when they had no phone or Internet.”

Kuo said a near round-the-clock net, which secured on November 14, took place in Ventura County on the Conejo Valley Amateur Radio Club’s BOZO repeater and the WD6EBY Repeater Network (PVARC) countywide, with updates, important evacuation information, and more. Kuo copied information from the repeaters and his scanner onto his Twitter feed, for broader dissemination.

He credited fellow CVARC members Stu Sheldon, AG6AG, and Zak Cohen, N6PK — the two primary net operators — for working to make sure everyone had current information on the fire. “Many others were also involved providing first-hand reports — in many cases, eyes on the fire and where it was at any point,” Kuo added. He said that with landline telephones, television cable, and internet service disrupted and cell phones intermittent, repeaters were often the only source of information.

“Personally, the whole disaster cemented for me how much more resilient Amateur Radio is in these kinds of situations, and how it’s actually pretty critical to keeping informed and aware of what’s going on,” Kuo said

Elsewhere, Scott Bastian, AK6Q, of the Catalina Amateur Radio Association (CARA) in Southern California, said a ham in Malibu used his club’s repeater to call for help at the onset of the Woolsey Fire that decimated Malibu and surrounding areas.

“This ham — and I do not have her call sign — used the CARA 2-meter repeater located on Catalina Island, calling for someone to make a phone call to the fire department as there was a large fire approaching her home, and she had no power or phone service due to our power company shutting off power due to the high winds and fire danger,” Bastian told ARRL. “Two of our members — Bob Parker, KI6UPJ, in Bellfower, and Gabriel Saldana, K6GLS, in Avalon were able to pull her information out of the ‘mud,’ as she had a poor signal. They were able to notify Los Angeles County Fire and get her aid.”