The meeting began at 7:30 with the Pledge of Allegiance.  First time visitors were welcomed, as were several newly licensed hams.  Thanks to Mike Felio-K6MJF for bringing the coffee, and Mark Horner-KK6IKX and Jim Inman-KB6JI for bringing cookies.

2019 Board of Directors.  We’ve had a few members offer to fill vacancies on the Board, and we now have a full slate of candidates (See the October President’s Message.)  Of course, any member is eligible to run for any position.  If anyone would like to nominate themselves or someone else, nominations are open.  Nominations can be emailed to info@cvarc.org.  Nominations are accepted right up until the vote, which is at the November club meeting.

Hugh Bosma Legacy Award.  We’ve received several nominations already.  If there’s someone you’d like to nominate, please talk to a Board member tonight or before the next Board meeting, which is on November 8.  The winner will be announced at the Holiday Party on December 13.

The Holiday Party is December 13, at the Best Western Posada Royale on Madera Rd. in Simi Valley.   The cost is $30/person.  Sign up and pay tonight or at next month’s meeting, or send a check, payable to Conejo Valley Amateur Radio Club, to PO Box 2093, Thousand Oaks, CA 91358 by December 1.

There will be TWO Raffles at the Holiday Party:  One prize is a $350 DX Engineering Gift Card.  Tickets are $10 each or 3 for $25.  You can buy tickets tonight or at next month’s club meeting.  Winner need not be present.  The second raffle uses all the raffle tickets purchased throughout the year.  The prize is a gently used mobile rig that was donated to the club:  A Yaesu FT-100 (HF + 2m/440).  The radio is no longer in production.  It originally retailed for $895.  One sold last month on eBay for $599.99.  The prize package includes two external speakers, a travel tuner, an SWR meter, power supply, cables, ground straps and mounting hardware and more.  All total, this is probably a $7-800 prize package.  For this raffle, winner must be present.

The next Basic Radio Tech Talk is tomorrow night, 7-9:00 pm, here at the East County Sheriff’s Station.  The topic is Digital Operations.  All are welcome.  You do not have to be a CVARC member, or even a licensed ham to attend.  Questions?  Contact Bill Willcox-KF6JQO.

The next Project Build – Magnetic Loop Antenna – The date has been pushed back to December 15 due to some back-ordered parts.  Questions?  Contact Adrian Jarrett-K6KY.

Cell phone apps – Next month’s meeting topic is ham radio-related cell phone apps.  If there are a few that you use and like, please let us know.

Grants:  CVARC has received $600 from the City of Thousand Oaks CEEF Grant (Community Events Endowment Fund), $400 from Northrup Grumman, thanks to Steve Leong-KC6IJM, and Brad-W6VO announced that the Rotary Club has donated $2,000!  Thank you Brad!

Gear Sale: Roger Armstrong-WD6EVT announced that he’s assisting with the sale of some gear for a friend, now a silent key.  It will likely be held on Saturday, November 3 in Moorpark.  Details to follow.  For more information, contact Roger at wd6evt99@yahoo.com. 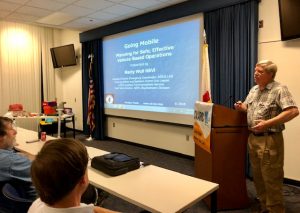 The November meeting is on November 15.  The topic is cell phone ham radio apps.  The pre-meeting dinner is at Yolanda’s in Simi Valley starting at 5:00.