The meeting began at 7:30 with the Pledge of Allegiance and a Moment of Silence for Sgt. Ron Helus and the other victims of the incident at Borderline Bar & Grill, as well as Melissa Reinhardt-KD6BIT/SK.  First time visitors were welcomed, as were newly licensed hams.  Thanks to Adrian Jarrett-K6KY for bringing the coffee, and Zak Cohen-N6PKfor bringing cookies. 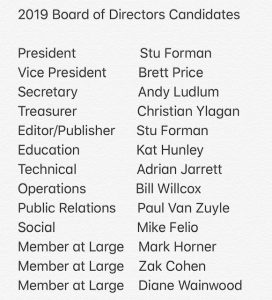 The Board of Directors had accepted nominations and prepared a Slate of Candidates.  Going into the November meeting, no Board position had more than one Candidate.  With no last-minute nominations made at the meeting, club members in attendance voted simply to approve the Slate of Candidates.  Those leaving the Board at the end of the year – Tim Wheeler-K6POI, Steve Gillis-KZ6H, Joe Sprissler-AI6MW and Ben Herrera-W6JWZ – were acknowledged and thanked for their service to the club.  Incoming 2019 Board members Brett Price-KM6VFW, Kat Hunley- K6VQN, Paul Van Zuyle-K6PVZ and Diane Wainwood-KJ6JEJ were welcomed

During the recent fires, the Bozo repeater served as an on-air meeting place to exchange information about fire activity, evacuations, road closures, etc.  Zak Cohen-N6PK was acknowledged for his service to the community by monitoring the repeater and handling traffic.  Zak thanked those who assisted, including Stu Sheldon-AG6AG, Kat Hunley-K6VQN, Todd Kleopfer, Arie-Izhak-WA6RIE and Ben Kuo-AI6YR, all of whom assisted in monitoring and traffic handling or were especially helpful with obtaining and sharing information. 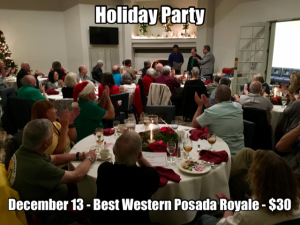 There is no December meeting. The Holiday Party is December 13, 6-9:00 pm, at the same location as the last few years:  Best Western Posada Royal on Madera Rd. in Simi Valley.  Spouses are welcome.  We’ll be honoring someone with this year’s Hugh Bosma Legacy Award.

The cost is $30 per person. Sign up and pay Andy tonight; or sign up and send a check to the PO Box by December 1.  The evening includes a buffet dinner and two raffles.  One raffle is for a $350 Gift Card to DX Engineering.  Raffle tickets are $10 each or 3 for $25.  Winner need not be present.  In a separate drawing, from all the raffle tickets purchased throughout the year a winner will be drawn.  The prize is a gently used mobile rig that was donated to the club: A Yaesu FT-100 (HF + 2m/440).  The radio is no longer in production.  It originally retailed for $895.  One sold recently on eBay for $599.99.  The prize package includes: 2 external speakers, a travel tuner, SWR meter, power supply, cables ground straps and mounting hardware and more.  All total, this is probably a $7-800 prize package.  Winner must be present at Holiday Party. 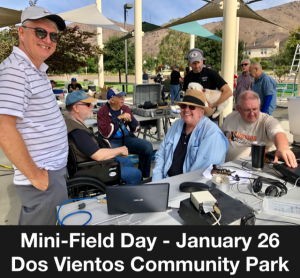 The next Mini-Field Day & Picnic is scheduled for January 26, to coincide with the ARRL Winter Field Day.  It will be at the same location as last time, Dos Vientos Community Park, 4801 Borchard Rd., in Newbury Park.

In January, CVARC is again offering 4-week classes to prepare for the Technician and General Class license exams.  Classes begin on Sunday, January 13 and lead up to the February 10 Test Session.  Classes are free.  They’re held in the Community Room of the East County Sheriff’s Station.

Stu Sheldon-AG6AG encouraged members to come out to the Skywarn event on Saturday December 1.  Members will be operating from the National Weather Service Office in Oxnard. 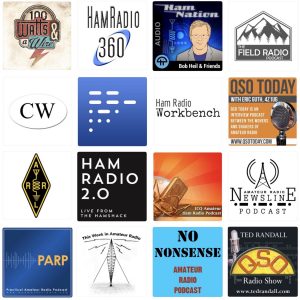