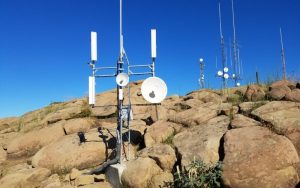 Rabbit Radio Network, founded in 1964, led by Emmett Dunlap-WA6COT is a closed amateur radio system made up of 11 UHF inter-linked sites on 9 mountain tops in Southern California from San Luis Obispo to parts of San Diego and to Las Vegas. Rabbit Radio provides link ports to the Cactus Intertie System.  All systems are equipped with emergency power and most have 2 meter or 6 meter remotes.  The Rabbit System has 649 miles of RF links, 43 transmitters and 43 receivers.  All members are control operators, which means they can configure the system as required.  Each mountain top location is custom built to meet the needs of the repeater operation.

A closed, private amateur radio system consisting of a large number of remotely controlled base stations, or “remote base” for short, that are interconnected utilizing full duplex links. This linked system covers large portions of California, Arizona, New Mexico, Nevada, Utah, Colorado and Texas. Additional coverage is available in Washington D.C. and the surrounding areas of Maryland, Virginia, West Virginia, Pennsylvania and Delaware on a full time basis. Coverage is also available on a full time basis in the Atlanta, Georgia and the Kalispell, Montana area.  There are several Affiliate Clubs that are member of the Cactus Intertie System, including Rabbit Radio Network, and Disaster Amateur Radio Network.

The Condor Connection is an open, 222 MHz integrated network of privately owned repeaters. The system covers most of California from below the Mexican border to North Central California, and parts of Arizona and Nevada. The system is intended for long-range VHF communications.

The GRONK Radio Network is a membership system featuring a collection of remote base stations on mountaintops and at other locations across areas of California, Arizona and Nevada. Originating in 1967, it pioneered the idea of dedicated intermountain links, remaining in operation over 50 years. As an association, it is headed by Matt Lechliter-W6KGB and encourages camaraderie among its members, technical excellence, skills growth and community support. The members enjoy chatting and keeping active especially with various technical projects and discussions.
Some local area frequencies are 446.66- 136.5 at Chatsworth Peak, 446.60- 136.5 at Diablo Peak, and 44620- 136.5 at La Cumbre Peak.”

DARN is a friendly, privately funded, closed repeater network consisting of 17+ RF-linked sites across Southern California, as well as several RoIP-linked sites beyond that. If you are interested, get on one of the frequencies and listen for a few days. If you like what you hear, have a look at the membership information page and if what you see in terms of membership requirements and privileges fits, feel free to take a test drive of the system and speak to any of the members. DARN has a monthly brunch in Santa Monica.  DARN has been on the air since 1959 and is administered Dick McKay-K6VGP.

The PAPA System is very active closed system led by Cecil Casillas-WD6FZA that has inter-linked analog and digital D-Star and DMR repeaters, providing extensive coverage of the Southern California region and beyond.  Papa has monthly breakfast and lunch meetings in the San Fernando Valley, Santa Monica and San Diego areas.  Every week Papa hosts several nets for new hams, technical discussion, DMR and D-Star roundtables on both the repeaters as well as HF.  The system currently has 21 analog, 16 D-Star, and 16 DMR Repeaters. 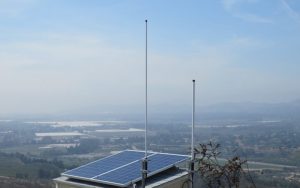 The Western Intertie Network, or the WIN System is a series of over 100 linked, or inter-tied repeaters; most are UHF repeaters, but they have some 2-meter and 220 repeaters as well, that cover a great deal of California, 16 states, and four countries around the world.