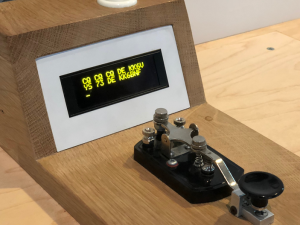 Last month, as part of my President’s Message, I included a story about calling CQ on a Morse code demo exhibit inside a Children’s Museum in San Francisco called Exploratorium. Paul-K6PVZ has since sent me the other ham’s version of the encounter, which was posted to the Exploratorium’s Listserv:
I’ve been trying to teach myself Morse code using an app on my phone (if that’s not Today’s World of Yesterday what is?) that teaches transcribing audible Morse into writing. For the “sending” I’ve been practicing on Doug T’s nifty Morse Code exhibits.
A few weeks ago as I passed by there was a visitor busily tapping away, and I recognized what he was sending. So, of course, I jumped on the key and replied with just about the only thing I know how to send in Morse.
In radiotelegraphy, “CQ CQ CQ” is an undirected call used to elicit any response from any operator. (Typically amateur radio operators stick to two-way transmitting and receiving, as distinguished from “broadcasting.”) “DE” is just short for “from” and KK6VYS is the operator’s call sign, or license.
My response was not exactly correct, “73” translates as “best regards” and is usually at the end of a conversation, but I led with it. (73 is a palindrome in Morse, “ _ _ … … _ _,” making it easily recognizable.) The other operator, Stu, is the President of the Conejo Valley Amateur Radio Club, and has a little write up about the interaction on the club’s website, www.cvarc.org.
P.S. The only other phrase I can tap out is “Mork from Ork,” but it’s only 5 characters!
Zeke
Floor Department, Unit 31, Ch 3