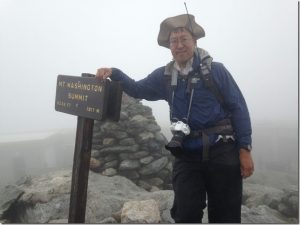 There I was, standing on the peak of the highest point in New England, Mt. Washington, known for some of the worst weather in the world, braving at least a 40 mph wind in forty degree weather and not making any contacts. The peak, the most prominent mountain east of the Mississippi River, sits at 6,288 feet, and is known for one of the fastest wind speeds ever recorded on the surface of the Earth, 231 miles per hour, recorded in April 12, 1934. The peak is also well known for being on the Appalachian Trail.

I was in New Hampshire for a mini family reunion, staying at the Appalachian Mountain Club’s Crawford Notch Lodge and it was only after the family 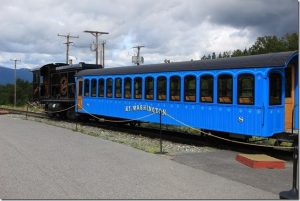 decided to take the famous “Cog Train” to the top of Mt. Washington, that I realized I might be able to add another “Summits on the Air” peak into my log. For those not familiar with Summits on the Air, it’s a competition where amateur radio operators look to contact, and “activate” the peaks of mountain tops. Mt. Washington is known as W1/HA-001, and it’s been activated 74 times since it was first activated in March of 2011. However, to my great surprise, I discovered that the history of Mt. Washington is intimately tied into amateur radio and the famous weather observatory on its peaks was actually co-founded by a number of ham radio operators. Even more interesting, for me, was to learn the history of the Appalachian Mountain Club (AMC), which operates a chain of hiking “huts” across the Appalachians for backpackers and hikers, is actually intimately tied into the efforts of one of the amateur radio operators who also established Mt. Washington.

Mt. Washington first became an official weather station in the 1870’s, with an official mountaintop station established by the United States Signal Service, a precursor to the National Weather Service, part of the U.S. Army’s Signal Service, before the advent of radio. In 1934, a permanent station was created, the Mount Washington Observatory, by four individuals; Bob Monahan, Sal Pagliuca, Alex MacKenzie (W1BPI), and Joe Dodge (W1UN).  Amateur radio was key to the endeavor, because, due to the extreme weather conditions on the peak, radio was required to relay weather observations off of the peak where 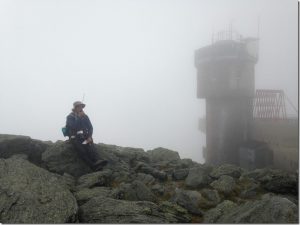 weather observers can be snowed in for extended periods of time. In fact, on January 6th of this year, the summit of Mount Washington was so cold, it tied for the second coldest on earth, hitting 36 degrees Fahrenheit, with a wind chill of minus 90. Despite those kinds of conditions, as you might expect for ham radio operators, being on top of a peak has a huge advantage in radio. Although radio was initially just a tool to keep the observatory in contact with headquarters at lower elevations, Joe Dodge, W1UN, figured out that because the summit is the highest location in New England, it’s also one of the best places on the East Coast for radio transmitters. According to a history book of the Mount Washington Observatory, it turns out that radio experiments on the peak helped pave the way for the use of the VHF band for long range, interference-free terrestrial communications. According to that history book, the Summit was “a magnificent” transmitter location for various experimental uses of untried radio frequencies.

One of the founders of the Mt. Washington Observatory, Joe Dodge (W1UN) apparently was instrumental in setting up the chain of hiking huts that are run by the Appalachian Mountain Club (AMC) today. Dodge, who ran the system of hiking lodges for the AMC, had planned to use amateur radio to interconnect all of the huts for managing services and logistics between the huts. One of the other co-founders of the Mt. Washington Observatory, Alex MacKenzie (W1BPI), had originally been tasked with interconnecting all of the huts run by the AMC with radios.  For a while, all of those huts were interconnected to the AMC’s Pinkham Notch headquarters by radio amateurs, although it ended up being tough to keep that system in operation due to the need for constant tweaking of the (mostly) home brewed radio gear in use at those huts. It turns out Dodge was a “ham’s ham,” he apparently established one of the very first amateur radio stations even when he was young, when he started one of the first private radio stations in the country, W1UN.  He became known for taking messages from ships at sea approaching Boston or New York City and relaying them to the telegraph system, all before the age of 17. He apparently also proposed to his wife via ham radio relay, when he was snowbound in the Appalachians at Pinkham Notch. Dodge’s interest in weather and the Mt. Washington Observatory  preceded the days of SkyWarn, when he survived the Great Flood of November 3, 1927 and started using radio to relay weather reports to one of the first weather reporting networks in the country, started by a professor at Dartmouth.

Today, when you visit the Mt. Washington museum at the top of the mountain, which most visitors do given that it’s more often to be clouded in than clear, one of the central displays is an amateur radio station. It is a separate transmitter and receiver with a bank of amateur radio crystals and a Morse key. Few casual visitors to the famous mountaintop realize how closely tied the weather station at the top is to amateur radio and the early experimentation of a few ham radio operators.

As for my SOTA activation, it did not go so well. The Cog Train only stops at the top for about an hour, and after 45 minutes I only got one possible, but scratchy contact. I needed 4 to officially active the peak, to become activation number 75 for the peak. That contact, on 446.000, told me he could hear me clearly on 146.520. Even with my squelch completely off, I couldn’t hear anything. But, if you take a look at the photos of Mt. Washington a clear day, it suddenly becomes clear why it’s so difficult to make a contact there, at least on a handheld running 4W and a whip antenna.  The mountain is a veritable antenna farm, with transmission towers for numerous television stations, high powered FM commercial broadcasting stations, numerous public safety and ham radio repeaters, a NOAA Weather Radio station and much more. Despite my failure to successfully activate the peak, the story behind the peak and amateur radio, which I didn’t even realize until after descending from the peak, is an inspiration to all amateur enthusiasts.

All about Joe Dodge, W1UN: