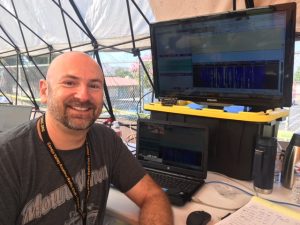 We had a nice turnout at the recent Mini-Field Day & Picnic.  People seemed to like the new location, so it looks like we’ll be back there for future events.  Thanks to Steve Gillis-KZ6H and Mike Felio-K6MJF for making the arrangements.  Also, I’d like to acknowledge and thank Dennis Fendelander-N2BEU for surprising us with a donation of various ham radio items.  The items will be free for the taking at the October club meeting.

In other news, the 2019 Board of Directors is taking shape.  We now have a full slate of candidates.  Nevertheless, if you’d like to run for any Board position, please email the Board or announce your candidacy before the vote at the November club meeting.

Those who have offered to serve on the Board of Directors in 2019 are:

Finally, the Board has received several nominations for this year’s Hugh Bosma Legacy Award, but nominations are still being accepted.  Again, Hugh was a long-time CVARC member, now a silent key, who is remembered for his giving nature and being very much the Elmer.  It’s in his honor that, every year, CVARC recognizes a club member for his or her contributions to the club and ham radio in general.  If you’d like to nominate someone for this year’s Hugh Bosma Legacy Award, please email the Board of Directors by November 1.  The winner will be announced at the Holiday Party on December 13.